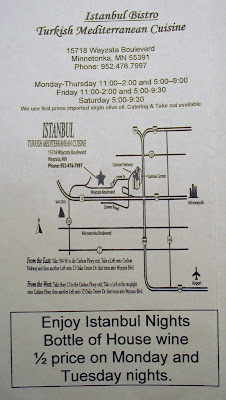 Istanbul Bistro
15718 Wayzata Boulevard
Minnetonka, MN 55391
952.476.7997
Rating: ****
If you are interested in Turkish Mediterranean cuisine look no further than the Istanbul Bistro located on the North frontage road of Hwy 12/394 between Hwy 101 and Carlson Parkway.

Istanbul Bistro looks very unassuming from the outside. It is in a small strip mall that you may drive by and not even notice. The interior is nicer than you might expect in a strip mall. A mixture of tables and booths make it a quaint but social setting. Lighting is subdued, with earth tones permeating the walls and floor. As you enter there is a counter with various ethnic items for sale such as Turkish coffee and accessories.

There are two menus to choose from; one fixed and one seasonal. The fixed menu offers the same dishes that many have come to expect from a traditional Turkish restaurant. Dishes such as Ezme, Humus, Pide Bread (just like pita bread), assorted kabobs, and traditional lamb dishes. The seasonal menu changes from time to time and offers a more contemporary spin on Turkish delights such as Lamb Clay Pot Stew, Salmon Wrapped In Grape Leaves, and Chicken Borek to name a few. There is also a wine feature and appetizer on the seasonal menu.

We started our dinner off with a bottle of Haywood Merlot. We find this wine to be smooth, rich and well balanced and since its considered one of Istanbul's house wines, it is offered at half price ($9.50) on Monday and Tuesday. We would suggest you try Istanbul on Monday or Tuesday so you can take advantage of this great deal. Another good reason to try Istanbul early in the week is because it is less crowded then on the weekends. Same great food but with quicker seating, more attentive service, and a much more relaxed atmosphere.

Next we tried the Calamari ($6.00) appetizer. We found it to be crisp fried yet tender on the inside. It was served with a red pepper aoli sauce. The sauce was creamy and smooth but also spicy with lots of garlic. An interesting note about this appetizer is that it is served garnished with lemons that were fried along with the calamari. This infused the dish with a slight lemon flavor.

Most entrees come with a choice of soup or salad. It is nice to see a restaurant that still serves this way in the ala carte world we live in. We both choose the salad which consisted of romaine lettuce, tomato, red onion, cucumber, and homemade red wine vinaigrette served with warm pide bread. Very basic, but fresh and fantastic. The homemade vinaigrette is a favorite in our book.

Peggy's entree was the Ankara Tava - Lamb Clay Pot Stew ($14.00). The stew contained cubed lamb meat, potato, onion, carrot, chickpeas, tomato, green pepper, and kasari cheese all in a tasty sauce containing first press imported virgin olive oil and garlic. The lamb is so tender it melts in your mouth and the mix of vegetables is the perfect fit. It is served in a corning ware type dish that is baked in the oven and is piping hot as it arrives at your table. Peggy wished there was more sauce since it was a little dry. She has had this dish before and her favorite part is dipping her food in the sauce. Entrees are served with an odd choice of basmati rice or french fries. Peggy chose the rice and it was great. Nice long grains and nutty flavor, but not sticky at all. Even though the dish was a bit dry tonight Peggy gives it a big thumbs up.

Andy had the Pollo Ripieno ($13.50). This is a dish containing a split chicken breast stuffed with spinach, ricotta cheese and garlic. It was topped with a unique sauce containing finely chopped almonds. The chicken was moist and seasoned well, and the mixture inside had a strong spinach taste. Accompanying the chicken was Spanish potatoes. They were quarter wedge cut and served crispy with a light seasoning on them. Again, interestingly enough, this dish was served with a choice of french fries or basmati rice. Imagine french fries served with Spanish potatoes...neither could Andy so he had the rice. All in all, Andy was very happy with this entree and would suggest it to diners interested in chicken.

Service was good with friendly servers greeting and seating us quickly. Water glasses were kept full, and we were asked about our meal several times throughout the night.

When the bill came we were surprised that we had such a well rounded meal for less than $50. Just think, a bottle of wine, appetizer, salad, pide bread, and two delicious entrees for $46.00 and some change.

We highly recommend you try the Istanbul Bistro. The service, staff, great food and ambiance make for a great dining experience.

MAP
Posted by andyandpeggy at 10:05 PM

Hey guys...Corbett and Merideth's cousins here. Just popped by to read your stuff, and we couldn't agree more on Istanbul!!! We find nothing better than walking into a place that looks like you could, for instance, buy a cat or, at the very least, a bag of fertilizer, and literally hear the "haaaaaaa" type sound as if you were walking into something so heavenly it can't possibly be imagined. Service...Cuisine...WINE...atmosphere...it's all there.

Thanks guys, it's nice to hear you had a good time and enjoy Isanbul as much as we do. Thanks for the kind words about the blog, we will try our best to keep it interesting.