Two criteria one can look at in determining a successful restaurant are how long it has been in business and how crowded is it on a typically slow night. The Tea House has been under the current ownership for 10 years which is a long time in "restaurant years" (think dog years) so it has the first criterion covered. Second we chose to try it out on Easter Sunday evening, a time when most places are closed and if they are open they have no customers. Not the Tea House. The parking lot was full and their were many patrons dining inside and several people waiting for takeout. So there you have the review; it must be good since it has been around for a while and there are lots of people on Easter Sunday evening. Sorry folks, I just cannot get myself to be that brief so here we go... 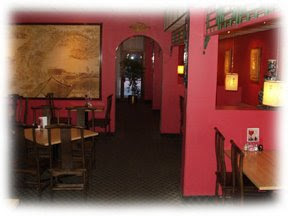 The restaurant is located in a strip mall just north west of the 394/169 interchange. Upon entering we were greeted quickly by a young man who proceeded to seat us in a window seat that overlooked the parking lot and the Willow Creek 12 Theater. The interior was neat and clean with red walls and Chinese light fixtures hanging from the ceiling. Our server approached with waters in hand and two menus to choose from. The "Regular Menu" consisted of a more domestic version of Chinese fare. The "Authentic Menu" was more what you would expect if traveling to mainland China.

Peggy and I decided to order off the "regular" menu. We started out with the House Specialty Soup For 2 ($6.95). A large bowl filled with soup and two smaller bowls for each person to eat out of. The soup had a chicken broth base that was slightly sweet and very salty. Pork, chicken, shrimp, pork won tons, carrots, water chestnuts, pea pods, and bok choy were other ingredients. The salty broth combined with the somewhat bland taste of the other ingredients made for an average yet satisfying bowl of soup. (just make sure you bring your high blood pressure meds if you have them)

For entrees I had the Chung King Spicy Chicken ($11.95) which is described on the menu as having lightly fried chunks of chicken stir-fried with onion, green pepper, and dried chili pepper in a special Szechuan sauce. The chicken is described as being fried so I was surprised to find the meat tender with a grilled flavor and texture absent the batter found on most fried chicken. I was thinking fried as in "deep fried" not "stir fried"...my bad. The sauce was somewhat spicy, dark in color and oily with a smokey flavor. This dish had a very deep intense flavor that came together well combining the spice of red chilies, with roasted garlic, and smokey sauce, making a pleasurable meal.

Peggy had the Sizzling Chicken ($9.95) described as slices of white chicken, water chestnuts, mushrooms, peas, carrots, broccoli, and napa in light sauce served sizzling hot at your table. The server brought a hot metal serving plate table side and poured the food mixture on it resulting in a sizzling sound with a large cloud of steam rising upward. The chicken was very tender and light which seemed to be the theme of this dish. The sauce was light yet flavorful and covered the chicken and vegetables like a warm cozy blanket of comforting goodness.

For desert we shared a bowl of Green Tea Ice Cream ($2.95). Two nice sized scoops served on an oval dish. It was green in color, creamy in texture, with a pleasant green tea flavor that was the perfect ending to a good meal.

Over ten years ago when Peggy and I were dating, we went to the Tea House and enjoyed it. Since then many things have changed including the ownership and menu. One thing that has not changed is that Peggy and I still enjoyed it very much. So the moral of the story is that all good things do not always come to an end...at least not in 10 years.