OUT OF BUSINESS SUMMER 2008

It was very cold and dark, the roads were icy, and there were not many people out that night. Maybe it's because it was the last Saturday of the year and people were still recuperating from their Christmas celebrations and preparing for New Years Eve. At any rate, it was a great night to go out if you like avoiding the crowds and getting more personalized service.

Steak and Ale has been a fixture in the Bloomington community for many years. I have a brother that lived in Minneapolis in the 70's and he remembers eating there back then. The company was actually founded in 1966 to “Provide an upscale dining experience at a casual price.” Let's see if they still live up to their 40 year old directive. 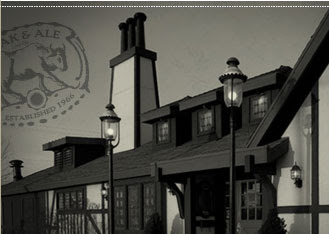 Peggy and I walked in and were immediately greeted with a smile by the hostess who proceeded to seat us promptly. As we were escorted to the table, we admired the old English type setting of plaster and dark wood, old worldly chandeliers, dark carpet, fire places and candlelight. They have a main hall which leads way to several dining rooms, some large and some small, and a good sized bar and lounge as well. We were seated by a fireplace at a cozy table for two that featured two large high backed chairs

Our server showed up quickly with a great attitude and took our drink orders. This night we kept it simple with a glass of house Merlot for Peggy and a vodka martini with olives for me. It's worth noting that the martini came with three olives, which is nice for sharing with your dinner partner.

When ordering appetizers we chose to go with the Pan-Seared Crab Cakes. Surprisingly our server told us that she thought they were the worst appetizer on the menu and that most people don't like them. We appreciated her honest opinion and went with the Bacon Wrapped Shrimp, which ended up being a great choice. It was served with six shrimp (three shrimp to a skewer) alongside a decadent herb hollandaise sauce. We both liked this appetizer.

For our main course Peggy chose the Filet Medallions and I chose the Braised Pork Osso Bucco. Each entrée is served with warm bread and honey butter, choice of salad bar, Caesar salad or a bleu cheese wedge. We both went with the bleu cheese wedge since this is the only place we know of where this is available. A quarter wedge of iceberg lettuce is served on a plate with tomatoes and chunky bleu cheese dressing on top. Although it could have used more dressing, it was a fun and tasty alternative to a traditional salad.

Peggy's Filet Medallions came two to the plate served with asparagus and garlic mashed potatoes. The filets were cooked to medium rare perfection (think “Melt in your mouth”) with a fabulous Merlot demi-glaze The garlic mashed potatoes were good and tasty but the asparagus was limp and woody. How they managed that one, I don't know. The tops were woody and tough and the bottoms were limp and lifeless. If I were the chef there is no way I would have ruined a great dish like that . Those asparagus should have never met the plate.

My Braised Pork Osso Bucco was very good. It was served falling off the bone on a bed of garlic mashed potatoes all drizzled in a portabella mushroom sauce. The flavors of this succulent dish all melded together very well. I was very happy, although if Richard Simmons would have been served this he probably would have ran out of the room screaming.

Looking back we liked many things about our visit, such as the great service, cozy atmosphere and some very delicious items. However, in this day and age there are just too many restaurant choices out there to allow mediocrity to distract from the experience. If you have a sub par appetizer like the crab cakes...simply make it better or take it off the menu. If you have limp veggies...don't serve them to your guests and offer them a better alternative. Once Steak and Ale gets the small details worked out, we will be happy to give them another try and maybe a better score.

Posted by andyandpeggy at 3:33 PM

I ate there once and th food wasn't bad but the dessert looked nothing short of a miscarriage.