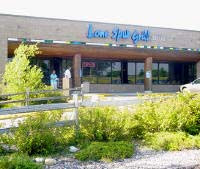 “Tex-Mex Cooking Served with Southwestern Hospitality” are words that occupy the menu cover at the next restaurant we are going to review. Lets see if they live up to their self proclaimed slogan.

Located in yet another suburban strip mall, the Lone Spur Grill and Bar is a popular spot in the Western metro. They draw a good crowd in both the Bar and Restaurant. The theme is what you might expect when you think Tex-Mex; painted murals on the walls, southwestern style pottery, ox skulls, tapestries, cactus, etc. Not a bad job of decorating for a strip mall.

After being seated, we were greeted by our friendly server. We both decided to try a drink special called the “Perfect Margarita” ($7.95). This margarita is made with upscale tequila served table side in its own shaker. You receive a small salt rimmed martini glass adorned with a lime and a full sized metal shaker with ice and margarita inside. I would say there is enough to pour about 3-½ - 4 drinks (keep in mind the small size of the martini glass). After the first couple of sips, I must admit I had a hard time stopping. It was so smooth and sweet. It reminded me of the way I drank Kool-aid or Tang when I was a kid. I didn’t want to just sip, I wanted to slam the whole glass. So beware and bring a designated driver.

The Lone Spur always seems to have good coupon deals consistently throughout the year. You will find these in the neighborhood circulars if you live in the area or you can find them online by CLICKING HERE. Since we were ordering two entrées and two drinks, we were able to take advantage of a free appetizer coupon (up to $7).

For our appetizer we chose the Moppo Wings ($7.99) which are whole battered chicken wings with Moppo seasoning. To use internet lingo OMG, these wings are out of this world! Six whole wings served crispy and piping hot seasoned to perfection. The seasoning is so good, like regular seasoned salt, but with cinnamon and nutmeg overtones. I once had a friend from out of town visit and he thought they were so good he took two orders to go and brought then back to Menomonie, WI with him.

When ordering our entrées I decided to go with the Bourbon Steak ($14.95) an 8 oz. top sirloin rolled in dry rub and topped with sautéed mushrooms and bourbon sauce served on a bed of crispy fried onions. The server took my order and later returned to let me know they had run out of that particular entrée. I asked if they had the Carne Asada ($10.95) an 8 oz. top sirloin marinated in chipotle sauce, pan fried with tomatoes and green onions, served on a sizzler with Mexican rice and refried beans. She had to check. The manager returned and informed me it was the 8 oz. sirloin that they were out of and that they would be willing to make either of those entrées substituting two 5 oz. sirloins instead. I declined and went with the Texas Size 12 oz. Smoked Beef Brisket ($15.95). The beef brisket is smoked for 14 hours, thinly sliced, and served fanned out on a plate with homemade barbecue sauce on top. I have to admit the brisket was cooked to perfection and I did not need a knife at all. It literally melted in my mouth and when paired with Lone Spurs amazing sweet/spicy barbecue sauce it sent culinary shivers down my spine. It is worth noting that all dinners include Texas toast, choice of coleslaw or cup of soup, and choice of seasoned steak fries, ranch house beans, cornbread or baked potato (after 4 PM). I had the coleslaw (creamy and crunchy and quite tasty) and the ranch house beans (smoky and spicy with barbecue flavor).

Peggy had the Chicken Fajitas ($12.95) served on a hot sizzler with red and green peppers and onion, accompanied with a builder platter of salsa, sour cream, guacamole, cheese, lettuce, tomatoes, Mexican rice, refried beans, and hot tortillas. At risk of using an oxymoron Peggy describes them as extremely average. The meat and veggies were cooked through, but seemed a bit bland. Lets face it, fajitas are not a rare find anymore. Many restaurants serve them and there is a certain standard of quality that we have come to expect. Usually when fajitas are grilled they get that nice smoky taste and the meat and veggies are blackened by the grill. Well no smoky blackened goodness here. Since this is listed on the menu as their house specialty, we will give them the benefit of the doubt and say the chef was having a bad night. They must be better than this to be a specialty.

As we finished our meal we discussed our dining experience and overall felt satisfied. The atmosphere was decent, service was prompt and friendly, drinks were fantastic, and most of the food was very good. We both recommend checking out the Lone Spur if your travels take you to the Western Twin Cities suburbs. Should you make a special trip from across town to try this place out? It depends…if you like good drinks and smoke house barbecue then yes, if you want good Mexican food we suggest you look into other alternatives.